Casey Weldon was born in southern California, where he spent the majority of his life up to his graduation from the Art Center College of Design in Pasadena. After past lives spent in Las Vegas and New York, he now lives and works in Portland, Oregon. By using to the iconography of today and yesterday’s popular culture, his work aims to awaken a feelings of nostalgia within the viewer, though often along with a sense humor, melancholy, and longing for times lost.

Here for his 3rd RUN with us, Casey Weldon brings us “If Your’e Out There Getting The Honey…” pulled from the recent 323East exhibition Lyric 2012 curated by Glenn Barr. Read on to read our exclusive interview with Casey where he talks about past influences, upcoming shows and the first piece of art that he bought.

If You’re Out There Getting The Honey… by Casey Weldon

Casey Weldon:  It is sold.

Casey Weldon:  I was invited to participate at the Lyric show at 323East, and I had had a loose idea based on the song “Johnny Appleseed” by Joe Strummer and the Mescaleros. The chorus reads, “If you are out there getting the honey, then you don’t go killing all the bees.” I’ve always thought the song to be about workers rights, especially those in agriculture and manufacturing, and that the the plea is to those who benefit from those services without fully appreciating those who provide them. I tried to depict a scene where a young, affluent woman clings to what may have made status possible, and looks onward, unsure about the setting sun and the drying farmland.

Casey Weldon:  It’s one of the few pieces I enjoyed painting the whole way through. Usually there is always a corner that is hard to turn, but I was having fun the whole time.

Casey Weldon: My thinking behind it may be a little heavy handed, but regardless of what I was think while painting it, I do think it can still remain open to interpretation. Hopefully it inspire a different one from every one.

1xRUN: Any suggestions for framing?

Casey Weldon: A thinner dark, rustic wood and thick, off white matting would be nice.

1xRun: Describe this RUN in one gut reaction word.

Casey Weldon: Whenever Teenage Mutant Ninja Turtles was a cartoon. For the first time.

Casey Weldon: That I remember liking? A pretty sweet copy of Shredder from the Eastman and Laird books.

Casey Weldon: There are so many, and it’s so easy to find now with this internet thing. Honestly I can go to ffffound.com or tumblr and get lost in clicking for hours and days and weeks.

Casey Weldon:  A lot of music, a lot of audiobooks and podcasts. Nerdist, WTF, Who Charted?, Radiolab, Comedy Bang Bang. I am a music glutton, and usually have the radio set to KCRW or KEXP or Radio Nova. I’ll listen to any book someone recommends, unless it is a teen trilogy.

Casey Weldon: Michel Gondry. His work is so wild and lo fi, and rely on the idea rather than the flourish.

Casey Weldon: Egon Schiele, because I often feel very stiff and the gesture that is in his every stroke is something I aspire to someday be able to match.

Casey Weldon:  I bought a Robotech animation cell at ComicCon that I cherished when I was a tween. It was destroyed in the Northridge earthquake 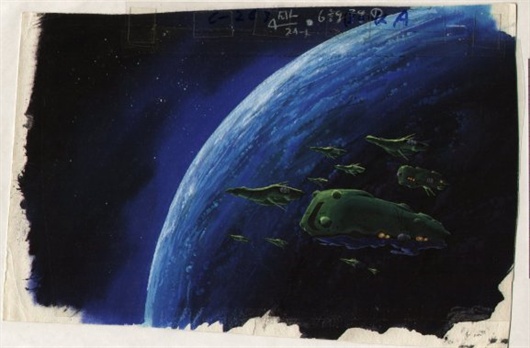 Casey Weldon:  I’ve been fortunate enough to have been able to hassle my artist friends into trading pieces with me. I was just very close to buying a Jeni Yang piece, but had to be saving for the big move.

Casey Weldon: I am part of an international collective of 25 artists that goes by PRISMA. We have our first shows opening this summer and fall in Los Angeles and Bath in the UK.

Other than that I have the solo show at Spoke Art in San Francisco titled “”New World Hoarder”” opening June 7th., and I have a LOT of group shows coming up at Gallery1988, WWA, C.A.V.E., Subtext, and more. I also have a two (maybe 3?) person show at Distinction Art towards the end of the year.