gilf! is an up and coming street artist working and living in Brooklyn. On a fast moving train to a neon-streaked unknown, the global community hangs on to the teetering semblance and imprint of a world that is crumbling. The facade that shields our awareness is something worth illuminating and discussing. At once powerful and playful, the street artist Gilf! is focused on creating positive change through her work.  Motivated by the idea of inspiring people who she will never meet, and breathing hope into many of these issues, her goal is to create art that provokes thoughtfulness and motivates a change of the zeitgeist. A portion of each sale is donated to a charity specific to that image, when applicable, which allows the collector to take an active approach to the world around us.

The Young Professional: Gilf from Stink Grenade Studios on Vimeo.

Here for her debut RUN with us New York City street artist gilf! has brought us her hand-embellished detailed Empower Equality. Read on for the exclusive 1xRUN Thru Interview with gilf! where she discusses her debut RUN, past influences and more…

gilf!:   This is a 5 color screen print on archival paper- I will be adding EVOLVE with water based markers.

gilf!:  It was created in response to New York state passing the Marriage Equality Act in 2011, right before Gay Pride weekend. The fist is best known for the Black Power movement of the 1960s in America. While it represented unity within the race, it originates back to 1930s Germany. This symbol was first used by the Communist Party in Germany. It was a symbol that the party members would display to one another to show their unity against Hitler.  The current tertiary rainbow colors represent all walks of life and my belief that all people should be given equal rights. It is time that all people are treated equally in this country- not just the people in power. Hence the title, Empower Equality.

gilf!:   Each embellishment takes about 40 minutes. The concept took about 2 weeks to tweak to perfection. Getting it printed took about 3 weeks.

gilf!:  Each piece is different with respect to the embellishments. I’ve hand drawn the word EVOLVE from left to right, and right to left. EVOLVE spelled backwards is EVLOVE- so a few people will think I’m writing LOVE over and over again. There are multiple color ways of this marker embellishment, so I estimate that EVOLVE is written around 800 times per print.

gilf!:  It is a symbol of our time, our future, and where we should be as a society. It represents a progressive way of thinking and being. Regardless of sexual orientation this piece shows that all should be empowered, all are equal, and that unity above all else is what creates the world we strive for.

gilf!:  Went to art school as a way to pass the time before grad school for automotive design. Automotive design wasn’t my thing. I came back to art to make work for the streets because I felt the need to express my feelings based on all the crazy shit going on in the world. I never had a studio practice before I was cutting stencils for the streets.

gilf!:  My first street piece was a little owl that said love life in Freeman’s Alley in New York City.

gilf!: Banksy, Swoon, Nick Walker & C215. Swoon was the reason I started making street art. There was a swoon by my apt and I walked by it everyday- it was on this gorgeous bright blue door. I was in awe of it. It caused a spark in me, I realized if her work can inspire me I could inspire others with mine. 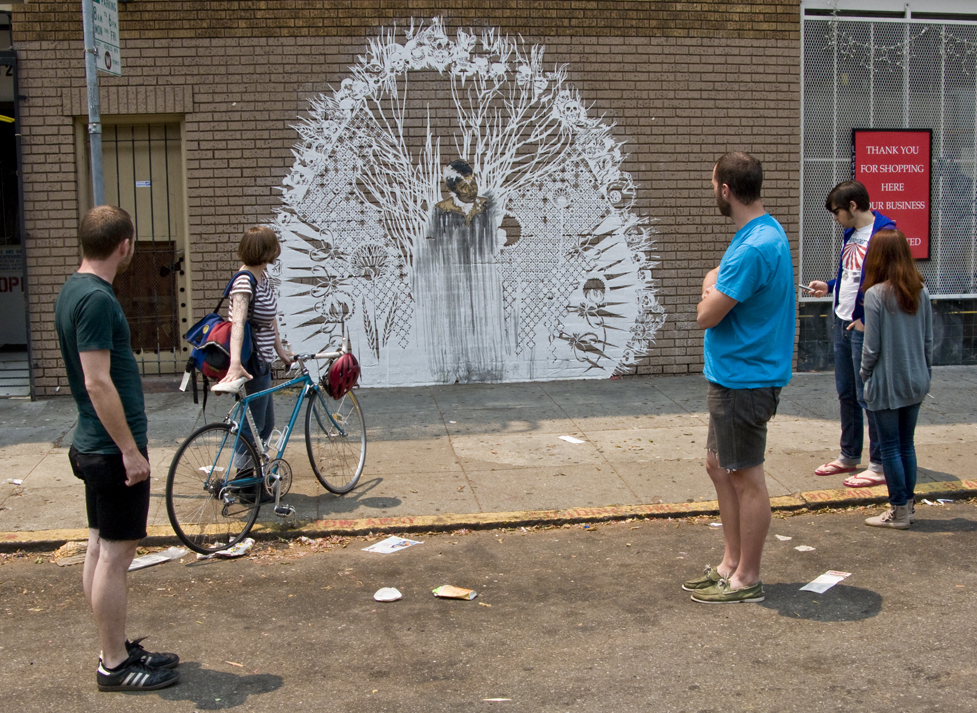 gilf!:  There is always music on in the studio. It varies, but lately it’s been a lot of Brazilian samba, Elza Soares, Marcelo D2, Seu Jorge etc. I love opening all the windows and blasting happy music- keeps me focused.

gilf!:   Maurizio Cattelan, he’s a prankster I think it would be fun to put our brains together to create something hilarious. I also look to collaborate with other creative industries like water conservations, architects, and industrial designers.

gilf!:  Eva Zeisel, her forms always enchant me. Alphonse Mucha, his work is so lyrical and completely opposite of mine I like to see opposite styles work together. gilf!:  I bought a black and white photograph of the Northern Lights when I was 18. I was leaving for college the next day, and wanted something to remind me of home. It’s here somewhere, buried in a box.

gilf!:  A “KEEP ON GRASS” piece from Skewville. It’s nailed to my wall above my sofa, next to a few “bricks” he gave me as a parting gift, a DEKRD that was wheat pasted to my wall and my thermostat that has a sticker of Kim Jong Il slapped to it. gilf!:   Hendershot Gallery (re)print show- open thru August 15th.  I have a solo show on June 26 at Gallerie Swanstrom in Soho. I’ll also  be working on a lot of large permission walls this summer and will continue creating 3d street art with fabric, moss, and whatever else I can play with.  I  may also be coming to Detroit to do a 3D install at a friend’s lot.