Born in 1985, Ian Ziobrowski has always had a natural ingenuity for art and design and the instinctive ability to bring his ideas to fruition.  Mostly known for his ongoing NUGGLIFE series, Ian pushes the limits everyday, sending out his creations on an international level.  You can view Ian’s works at events like Art Basel, Comic Con’s, and in stores and galleries including Kidrobot, 1AM, Toyqube, and Rendition.

Ian Ziobrowski:  Yes, it will be available here through 1xRUN. The original is 18 x 24.

1xRUN: What materials was the original printed on and drawn with?

Ian Ziobrowski: I created this with Acrylic paint with little touches of oil in the face.  Applied using an transparent technique. I feel this gives an glowing effect, especially in the greens on the plants.

Ian Ziobrowski:  I created this painting while working on a custom vinyl NUGGLIFE set commission for a collector (see pics). This project helps you view the characters in a 3D world.  But I had to illustrate this world in order to put the story together.  So by producing a painting in a hyper animation style I can let peoples imagination have something to feed of off. Now you can start to see the story viewed in my head piece by piece. This is my first print ever to be released.  Also this painting is the first of an on going series of my NUGGLIFE world that illustrates my custom vinyl figures.

Ian Ziobrowski:   3weeks. At the time I was working on the custom NUGGLIFE set and one of the pieces is a grow room with a large window in the front.  Through the plants you can see NUGGS inside, so I instantly had to paint this.  Since it is the beginning of the story NUGGS surrounded with his precious friends would be the perfect way to approach this.

Ian Ziobrowski:  Its makes me wanna jump on in and hang out with Nuggs.

Ian Ziobrowski:  This is just the beginning for me. Three years into the urban vinyl world, I’ve gotten my name into a book to be released Jan 2013 (I can’t say title yet) , and I’m a nominee in the category Break Through Artist in the Clutter Mag 2012 designer toy awards.  I’m booked with huge commissions into 2013 and I’m going to book my first solo show for 2013.  NUGGLIFE is going places and I’ve been working continuously on this for three years.  This is my first painting illustrating NUGGS and with prints being much more cheaper than originals collectors have something more affordable.  I feel they will appreciate this and seeing there’s a whole story behind NUGGLIFE along with my 3D figures, collectors have something to relate to.

1xRun: Describe this piece in one gut reaction word.

Ian Ziobrowski:  When I was 7 years old, I did my first drawing.  Since then I haven’t stopped.  I have an older brother who is an artist as well.  We have two completely different styles but I always had someone to be inspired by growing up.

Ian Ziobrowski:  In March 2009 I was inspired to create a character that portrayed self made prosperity and the ability to live the ‘American Dream’ without following society’s standards of the path to getting there.  So NUGGS was created.  It’s when I realized I had something.  At the time I made a custom birdhouse that was a secret grow room, and needed a character to go inside. It worked out perfectly as my first appearance in the art world. 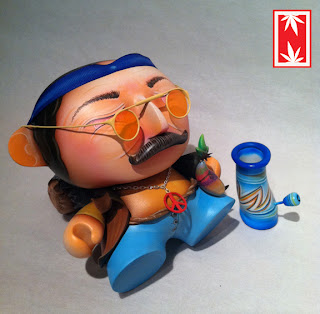 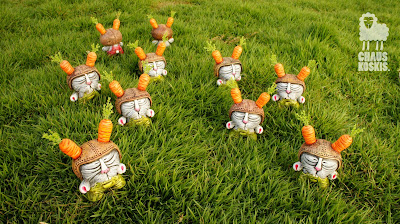 Ian Ziobrowski:  Yes, right now there are some crazy instrumentals I’ve been playing in the studio.  I’m listening to some J DILLA as I write this. I do my freelance work in the day time mostly, I like to work on my personal pieces from the evening on.  Much more peace full then.

Ian Ziobrowski:  With no thought FERG!  I just love the quality of his pieces and the little clothes designed up for them. Hopefully one day! Ian Ziobrowski:  Sounds random but I would love to sit down and collaborate with Rembrandt.  His works and how he executed them were mind blowing.  Right now I’m working Two canvases inspired by Rembrandt for NUGGLIFE.

Ian Ziobrowski:  I bought the Shaved Trooper canvas by German Graffiti artist Flying Fortress. It hangs in my studio.

Ian Ziobrowski:  I purchased a Adam Pratt piece from the Custom Candy Coated Show at the London Candy Shop in NYC. Its an Evil Thomas the train all geared up with guns and stuff.  Its bad ass.

Ian Ziobrowski:   Currently I’m working on a Custom Jimi Hendrix & Evil Willy Wonka, three new canvases for NUGGLIFE, and preparing for NYCC in October as I will be releasing resin sets of NUGGLIFE characters.