Justin Lovato is a working painter from Sacramento. He currently resides in Berkeley, California. He creates dreamlike, ethereal landscapes that reflect his thoughts on nature and our relation to it, human belief systems, the psycho-political-control system, multidimensional concepts, and esoteric symbolism.

Justin Lovato’s work has been shown throughout the world in cities including Portland, OR, San Francisco, CA, Los Angeles CA, Miami FL, Washington DC, New York and Moscow, Russia. A self taught artist, Lovato’s method is more instinctive than learned and more evolved than trained.  Through the use of visual communication Lovato applies contrasting opposites, creating an illustrative narrative that aims to capture the movement of ideas and philosophy, people and the detachment from the systems within which we are confined, exploring the ideas of passing and dissolving memory, experience, dreams and expansion of awareness through a personal image mythos mixed among archetypal esoteric symbolism that draws from our past and collective human experience. 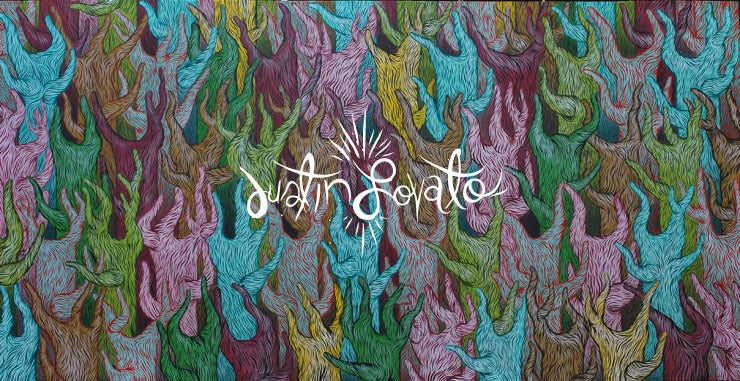 1xRun:  What materials was the original printed on or drawn with?

Justin Lovato: The original is layered watercolors and ink, starting soft and building up until I define it further with harder line work. I will be hand embellishing each print using similar materials.

1xRun: When was the piece drawn and created?

Justin Lovato:  2012, it was created for a small show in my hometown of Sacramento. A couple friends from Heckler magazine did a video piece on the show, which features the piece briefly here:

Justin Lovato:  The piece is hinting at the contrast between the humble origins of the ever unfolding complexity of the material world. The mountain with crystals growing out of it is resting on delicate looking structures that look like proteins and micro organisms, contrasting with straight lines and geometry found between the crests of these natural curves.

1xRun: How long did this piece take?

Justin Lovato:  It represents a new path in my imagery towards a focus on the natural world and a dissolvement of some of my previous focus on figurative representational characters.

1xRun: Why should people buy this piece?

Justin Lovato:  Money is representative of your energy. If you can spare the money to give in exchange for a piece of art that reaches out to you in a unique way, that allows me to create more of these images via your sacrificed representational energy. Only buy it if it speaks to you.

Justin Lovato:  I first started drawing as far back as I can remember, but I started doing it more consistently and pushing myself to improve at around 18.

Justin Lovato:  My first drawing I remember was a bear from when I was 4. I used to obsessively copy super heros out of my comic books too though. Around 18 I made my first wood panel to paint on. I painted characters and words and whatever may have flowed out. I probably used ink, spray paint and house paint because that’s the materials I could scrounge up at the time.

Justin Lovato:    Todd McFarlane was a huge influence when I was a kid. The only art I really cared about was in comic books really. At about 12, I discovered writing graffiti and tagging, so my main focus was stealing markers and paint to do that, and my influences were graffiti writers. Not that I was getting up in any significant way, that’s just what really got me excited, the act of illegal art. Later it was those people who had made a transition into the art world, mainly the San Francisco 90’s mission movement that had me stoked to keep making art. I remember making pilgrimages into San Francisco at 15 years old to take as many photos as I could fit on a disposable camera of any famous bombs murals or tags I could find of KR, Amaze, or Twist, Giant, and so on.

Justin Lovato:  I am inspired by so many artists. For a while I was obsessed with medieval era esoteric paintings, alchemical paintings and things like that. I love cave art, and primitive art. Right now I’m really feeling The Further Collective. I also love psychedelic art like Alex Grey. There’s really too many inspiring artists, anybody pushing the boundaries of their own capabilities, I enjoy following. Right now the most inspiring artist to me is nature. I just got back from backpacking in desolation wilderness in the Tahoe California area. Justin Lovato:  I have been listening to Balam Acab, Black Moth Super Rainbow, John Coltrane, Alice Coltrane and lots of stuff. I also listen to a lot of audio books and podcasts. My favorite new podcast is Startalk radio with Neil Degrasse Tyson. I also love the Psychedelic Salon podcast. I am in the middle of a Richard Dawkins book, “The Greatest Show on Earth.”

Justin Lovato:  I would want to collaborate with Andy Goldsworthy. I think that man is a genius and I want to be in nature more.

Justin Lovato:  Sadly I haven’t really been able to buy a significant art piece. The only art I own have been the result of trades. I think my favorite trade has been a Jay Howell and Jason Vivona collaboration painting on paper.

Justin Lovato:   I will be in Pangea Seed’s Summer 2012 art tour with a great line up of artists. It’s an art show raising environmental awareness focusing on sharks, sharking and it’s effects on the eco system. Great cause.

Later this year in September I am in a two man show at 111 Minna gallery in San Francisco with an amazing artist named Scott Greenwalt. I’m very excited about this one!