Graffiti writer RISK & artist Nathan Ota have been collaborating since their formative high school years. We’re excited to debut the first of a series of collaborations from the Californian duo, the first of which highlights a trouble laden period of time in the graffiti career of RISK. Read on for the exclusive 1xRUN Thru Interview with RISK as he discusses his upcoming print with Nathan Ota. 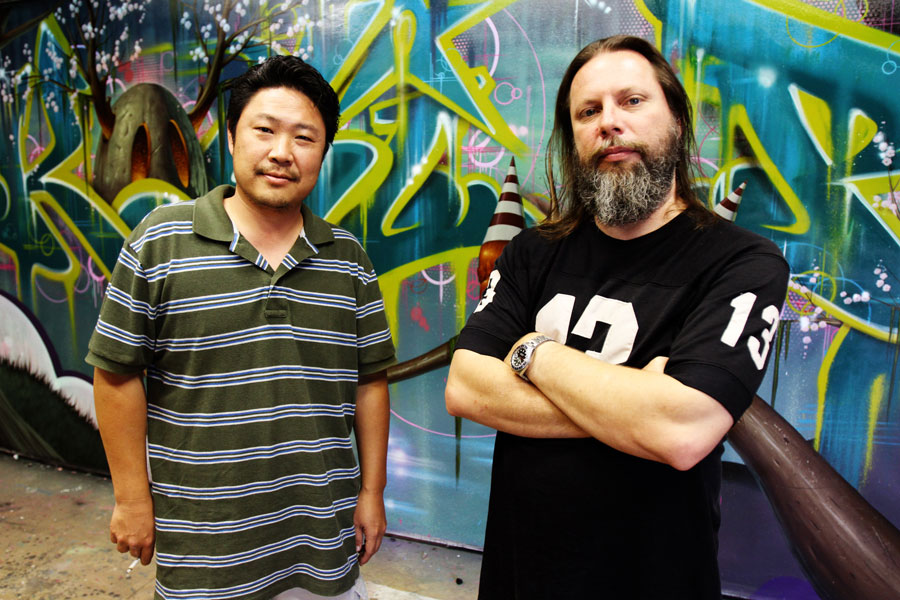 1xRun: Tell us a little about the original, is it still for sale?

1xRun: When was the piece drawn/created

RISK: It was from the first collaboration show with Nathan Ota. Nathan and I have been painting together since high school and we do one collaboration show a year. This piece was a classic, it is classic Risk with the R, and it is from our first body of work

RISK:  At the time I was going through a lot of drama with the city officials. Nathan and I were talking about how they were crucifying me. We were making jokes and then we thought of how we could translate that with out being to blatant and corny. This is the image we came up with. It is an abstract urban representation of me being crucified by the city officials.

1xRun: How long did this piece take?

RISK:  It is a collaboration between myself and Nathan Ota, and it is our first body of work.

RISK:  I believe you should only buy art you love, if it strikes you, evokes emotion or you just really like looking at it, you should buy.

RISK  Since before I can remember. My grandmother told me about all the things I made. She gave me things like buttons, and empty spools, etc. as toys. I had to be creative to occupy my time.

RISK  My first graffiti piece was a “Surf” piece on the side of UNI hi in Los Angeles.

RISK    The Los Angeles Fine Art Squad did a piece on the side of the West LA police station. It was a freeway falling off into the Ocean….This was the first Mural that blew me away! just look at it!

RISK  There are too many to list, every one in MSK is truly inspirational. RISK  I listen to a lot of Led Zeppelin, Classic Rock, Funk, and Blues. Especially when I’m doing graffiti pieces, I lie to imagine my letters dancing or fighting.

RISK  Zeppelin. I know they are musicians but that’s who I’d like to collaborate with. RISK  Michelangelo.. He is the best-documented artist of the 16th century, and considered one of the best artists of all times, yet he had a very low opinion of painting. Some of his work among the most famous pieces of all times. There is too much to say about him and his work, he had so many mediums and attributions. He was considered the greatest living artist of his time and he pioneered Western Art. I don’t think you could get any better than that!

RISK  A Robert Williams print and I still have it.

RISK  I’m currently trading Seen for a piece. I consider him to be one of the all time best graffiti artists!

1xRun: What else have you been up to? What else do you have in the works?

RISK:  I’m working on a show in London happening in conjunction with the Olympics next month.