“I was born and raised in Los Angeles, California. I started painting graffiti in 1985 eventually graduating from Art center college of Design.  The content of my work is pronounced by my travels and continuing exploration of animal spirits, nature, and the struggle of predator vs prey in male and female roles.” – Shark Toof

Here for his debut RUN, Shark Toof, brings us a cutting psychedelic detail laden print Two Girls & Three Tigers. Read on as Shark Toof gives us the RUN Thru on his debut RUN, his past influences and more.

Shark Toof:   The piece recently sold at a group show at Thinkspace Gallery titled Wild At Heart.  It is 24″ x 24″ framed in thin pine and is $3000. The inspiration behind the piece and continuing inspiration is from my recent travels to Southeast Asia, specifically Thailand.

Shark Toof:  This piece is significant in the journey towards my solo show in October titled “Ping Pong Show.”  Two Girls And Three Tigers illuminates the contemplation of nature, culture, predator vs. prey,  and recent travels to Thailand and the middle east.

Shark Toof:  The idea is a culmination of seduction, animal spirit, philosophy of culture and its roll in the idea of predator vs. prey.

Shark Toof:  1 square inch could take 1 – 5 days depending on how it’s working with the painting as a whole. My process can be masochistic.  It’s a chess match.  My roots as an illustrator is that everything is planned out.  I’m going against the grain in more of a fine art direction by allowing the painting to guide me, to ask me questions.  There are very small to very large details to this piece from color, to shape, and form.  These details were in large part not preplanned and a manifestation of content. Also, each print will have a completely unique spraypaint stencil hand embellishment.

Shark Toof:  Since my early kinder years. I didn’t have all the toys other kids had so you are left to be supremely resourceful.  A stick was a rocket ship. A rock was a planet.  A pencil, I could create any toy I ever wanted.

Shark Toof:  I would always draw space vehicles and lunar battles.  My first graffiti drawing I did on the inside of a dictionary in 1985 said “PUMA”.  My parents couldn’t afford to buy me Pumas though, so I wore Vans.

Shark Toof:    Before I did graffiti, I was heavily into comic books, Stan Lee, etc.  The first graffiti black book I saw which changed my life was David Arquette’s in 1985.  My early influences include Caravagio, Richard Bunkal, Ray Turner, Victor Vasarely, Edward Kienholz, Robbie Conal, Kent Twitchell, Clayton Brothers, Manuel O Campo, and a slew of others. Shark Toof:  Yes, I can go from Devendra Banhart,  MF Doom, to The Stooges on Slacker radio.  Most of the time KCRW and NPR keeps me grounded.

Shark Toof:  David Choe.  I think it would be a perfect mixture of hilarity, mayhem, and sexy shit.

Shark Toof:  Marcel Duchamp.  I think it would be a perfect mixture of hilarity, mayhem, and sexy shit.

Shark Toof:  An Andrew Schoultz painting in 2004 and yes I still have it. 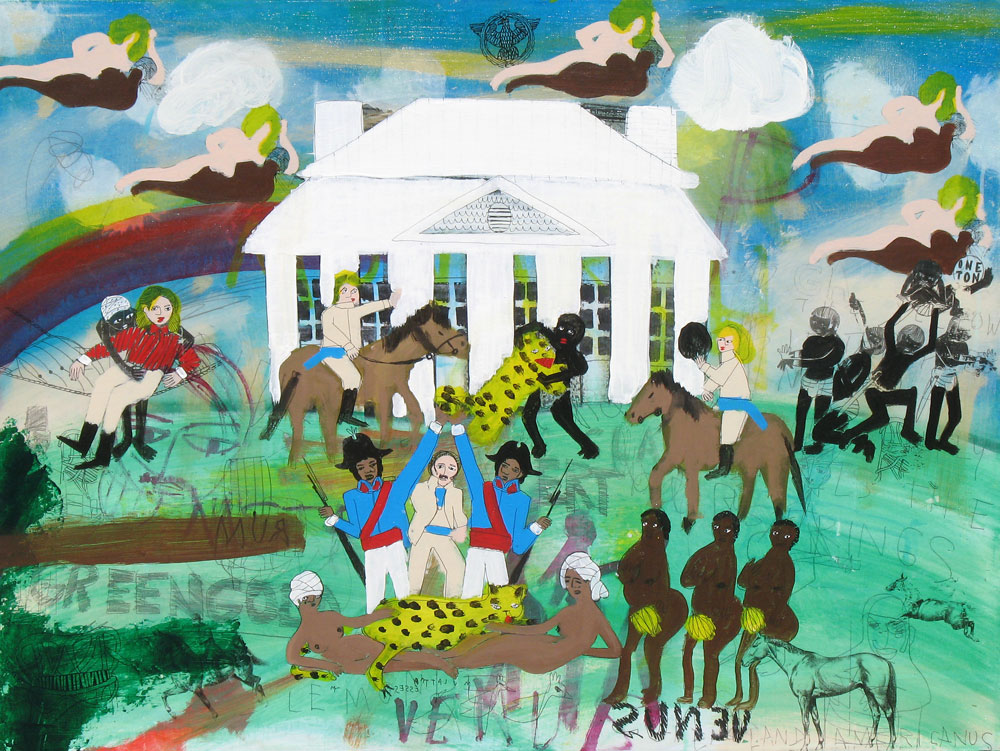 My solo show with The C.A.V.E. gallery in Venice Beach, titled “”Ping Pong Show”” will be in October.